This week we welcome our first BCS guest blogger! Quinten Smith is an English teacher, self-proclaimed nerd, and Pokémon expert. Smith began his quest to catch ’em all in 1998 in his living room while watching the premiere of the Pokémon TV series. The day that he graduated second grade (circa 1999), his mom gave him a Game Boy Color with Pokémon Blue and the rest was history. 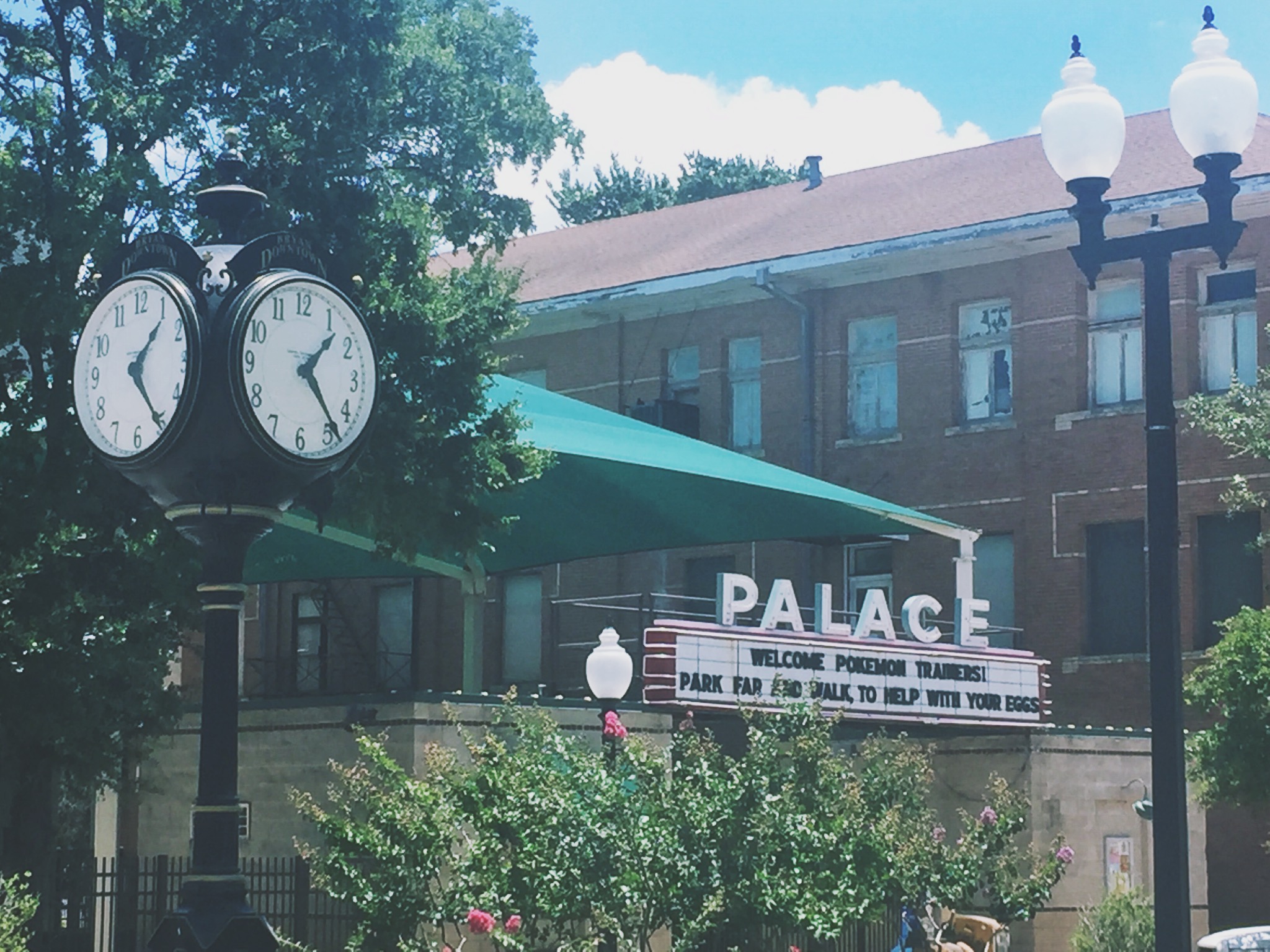 Pokémon GO has struck the world as the latest global phenomenon that is sweeping the country and, with the game available in over 30 countries by now, it has cemented itself as one of the most popular mobile games in history.
Bearing all of that in mind, this post is designed to help you, the average Pokémon GO trainer living in the Bryan College Station area, along with some great tips if you’re just now starting, or if you’ve been trying to be the very best, like no one ever was, for the past two weeks.
VETERANS PARK (FAIRIES GALORE)
If you are a fan of Jigglypuff, then this is the place for you. Walking around for an hour resulted in enough candy to form Adele, my nicknamed Wigglytuff which served as the cornerstone of my team for quite some time. Aside from the rare Pokémon you can encounter, the park is loaded with Pokéstops in very convenient loops, so you can run your circuits while loading up on those precious pokéballs.
DOWNTOWN BRYAN (EEVEE CENTRAL) 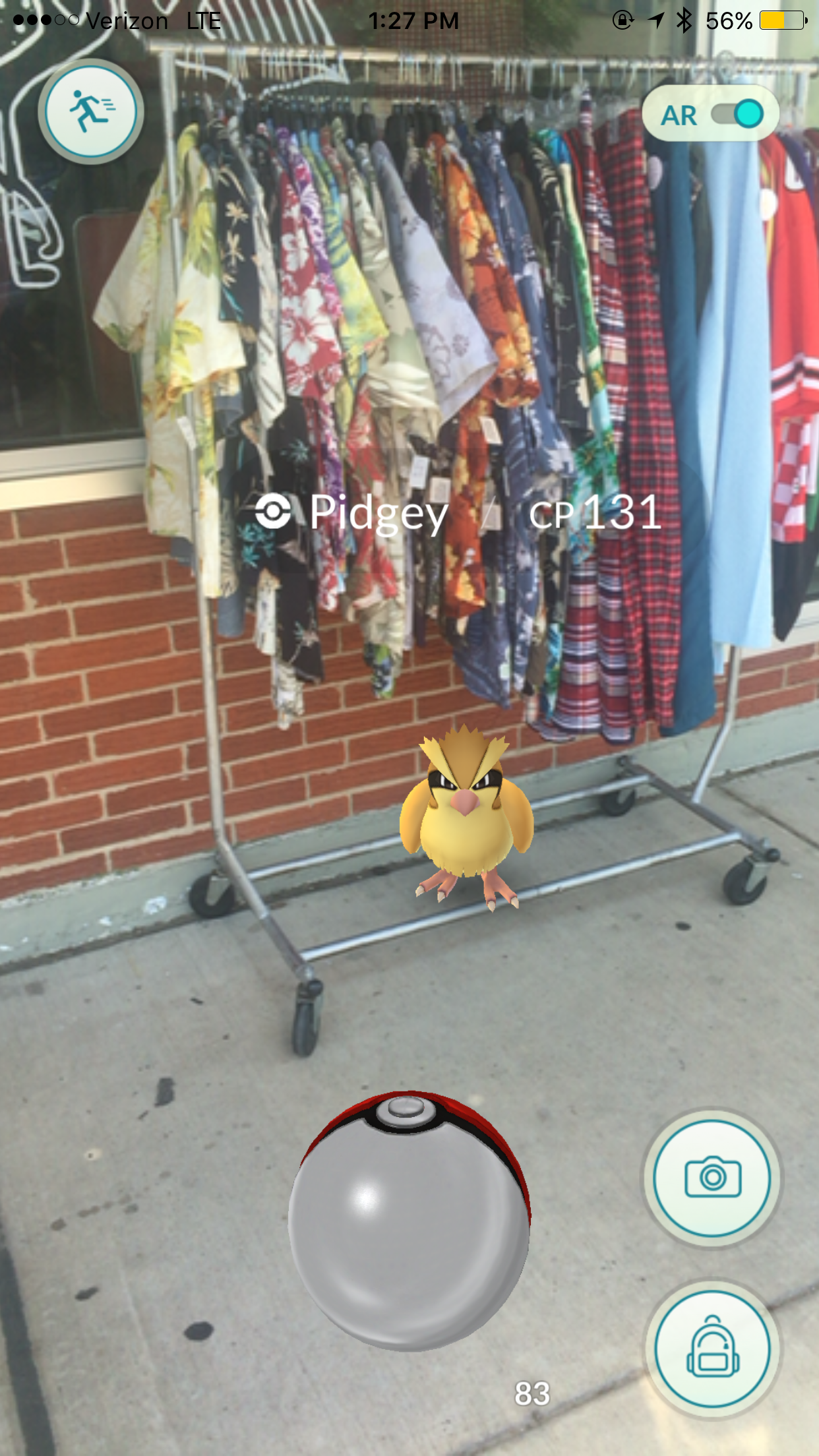 A wild Pidgey in Dowtown Bryan.

In terms of urban areas in the BCS region, it doesn’t get better than the hustle and bustle of Downtown Bryan. For the past two weeks I haven’t been able to travel around downtown without seeing trainers fighting over the Carnegie Library Gym and taking advantage of the La Salle Hotel double Pokéstops at any hour of the day or night. The popular Pokémon Scyther is known for appearing in this area along with Oddish, Staryu, and a lot of Eevee. Restaurants and shops will have lures around so you can browse and grab a bite while you are trying to catch them all.
TEXAS A&M UNIVERSITY (GHOST TYPES) 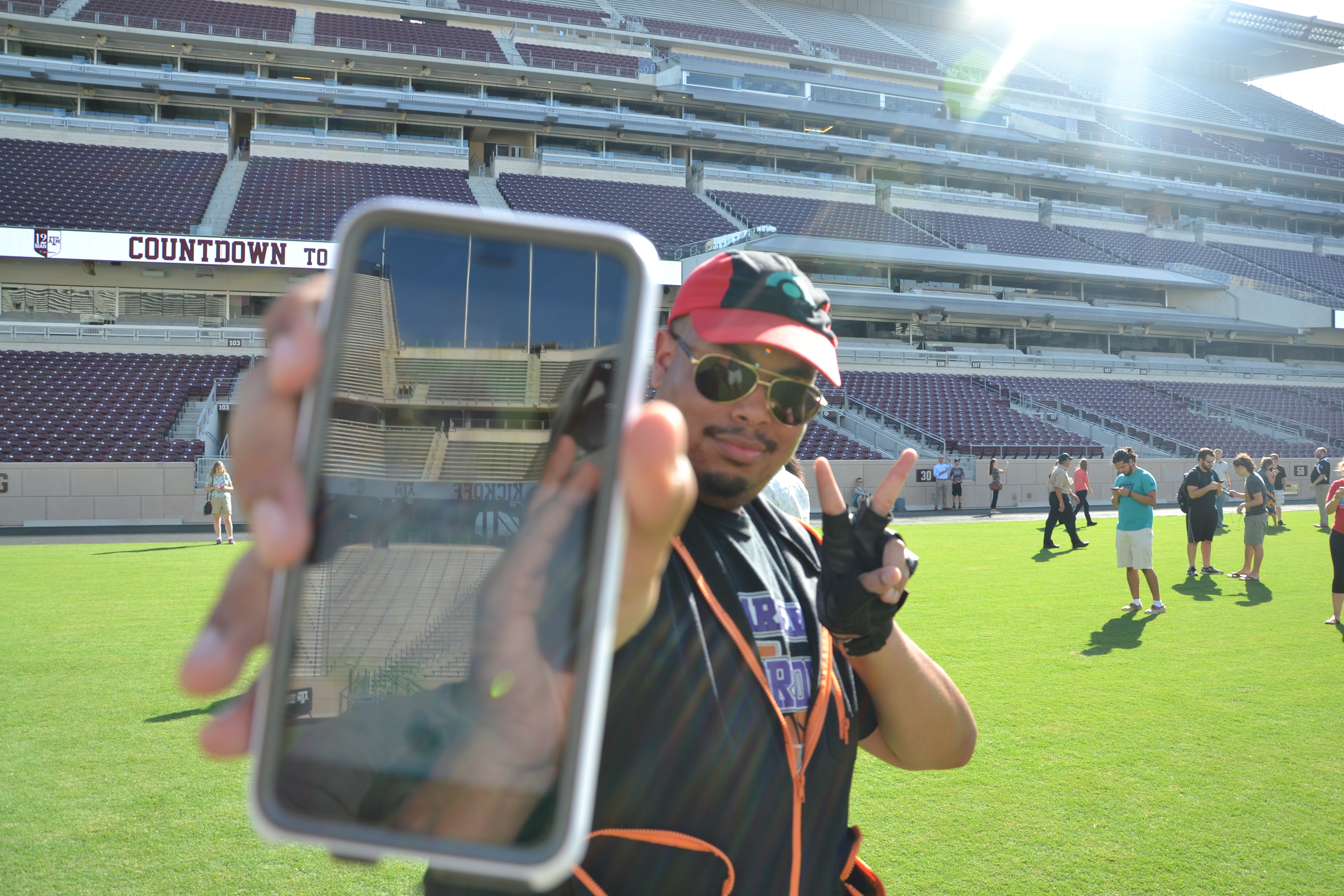 This is me after catching Hitmonlee at Kyle Field.

The developers of the app have stated in interviews that the more players in an area, the better chance of a rare Pokémon spawn, and you won’t find a more dense area of players than the heart of Aggieland. Ghastly, Haunter, Abra, and the infamous Snorlax have all shown up while students have been attending summer classes and going on their campus walks. Take some time to soak in the wonderful tradition and history of one of the country’s most illustrious college campuses while adding a few newbies to your Pokédex.
WOLF PEN CREEK PARK (MAGIKARP & BULBASAUR)
If there is one place in the BCS area to hunt for Pokémon, it’s WPC park. Boasting two great circuits for Pokéstops and more Magikarp than you can shake a stick at, you will love running into trainers at any hour of the day trying to get enough candies for the most sought-after Gyrados. Water types, such as Goldeen, Poliwag, Squirtle; grass types like Oddish, Bulbasaur, Bellsprout; and the pseudolegendary Dratini and Dragonair have all made appearances to players walking around the creek or relaxing along the amphitheater hillside. Many businesses in BCS have devoted their time and delicious resources to the hungry and thirsty trainers that congregate there in the evenings, most times for free, so bring your incubators and your appetite and be prepared to make new friends at the current Aggieland hotspot for trainers.
Before you grab your water bottle and your sunglasses, check these quick tips that any trainer can appreciate:
CHECK THE SERVERS BEFORE YOU GO OUT
It’s no use driving for 15 minutes only to be disappointed that the game is not working, so boot up the app before you leave. Alternatively, you can go to this website and it will check for you.
TRAVEL IN GROUPS
As previously stated in the post, the more people you have with you, the greater the cellphone traffic and the greater chance you have of more Pokémon appearing in your area, so don’t hesitate to bring anyone you know who plays with you. Anyone can catch the Pokémon that spawns in an area; it is not a first come first serve type of game.
SAVE YOUR PIDGEYS
The little bird may be the most annoying Pokémon in the game, but every time you catch one, that’s 100XP AND 3 candies. As you get to the higher levels, it will seem like a difficult grind to progress in the game. However, if you save up all the pidgeys you catch along with a couple lucky eggs, then you can spend the 30-minute period evolving all of your pidgeys, netting you 1000XP for every evolution during the effect of the lucky egg. (Note: this also works with Caterpie and Weedle, since all three Pokémon only require 12 candies for their first evolution)
INCENSE WORKS BETTER IF YOU’RE MOVING
The items that attracts Pokémon to you specifically is a pretty rare item, but once you activate one, start moving, because once that happens, you should see Pokémon appear next to you every minute or so, and once they spawn, they’ll stay there for about 15 minutes before it goes away and is replaced with something else (Note: This is the case for all Pokémon spawns in the game ****They’ll be in an area for about 15 minutes, and then the spawns change again****)
Continue to enjoy the game! Remember that this game was designed for exploration, camaraderie, and, more than anything, exercise. So don’t be afraid to sweat to find that Pikachu. So grab your external battery pack, some water, and turn your phone to low power mode. I’ll see you out there trainers!
Until the servers die again,
Mr. Smith