The newest offering from the Brazos Valley Museum of Natural History is the Tarzan: Myth & Mystery exhibit. This exciting exhibit showcases a wonderful collection of Tarzan and Edgar Rice Burroughs memorabilia ranging from original artwork, to rare books, and unique film posters. Visitors can explore the natural settings of the Tarzan stories, the life of author Edgar Rice Burroughs, and the world of pulp art. CVB intern, Keefer took a trip to the Museum to tour the exhibit! 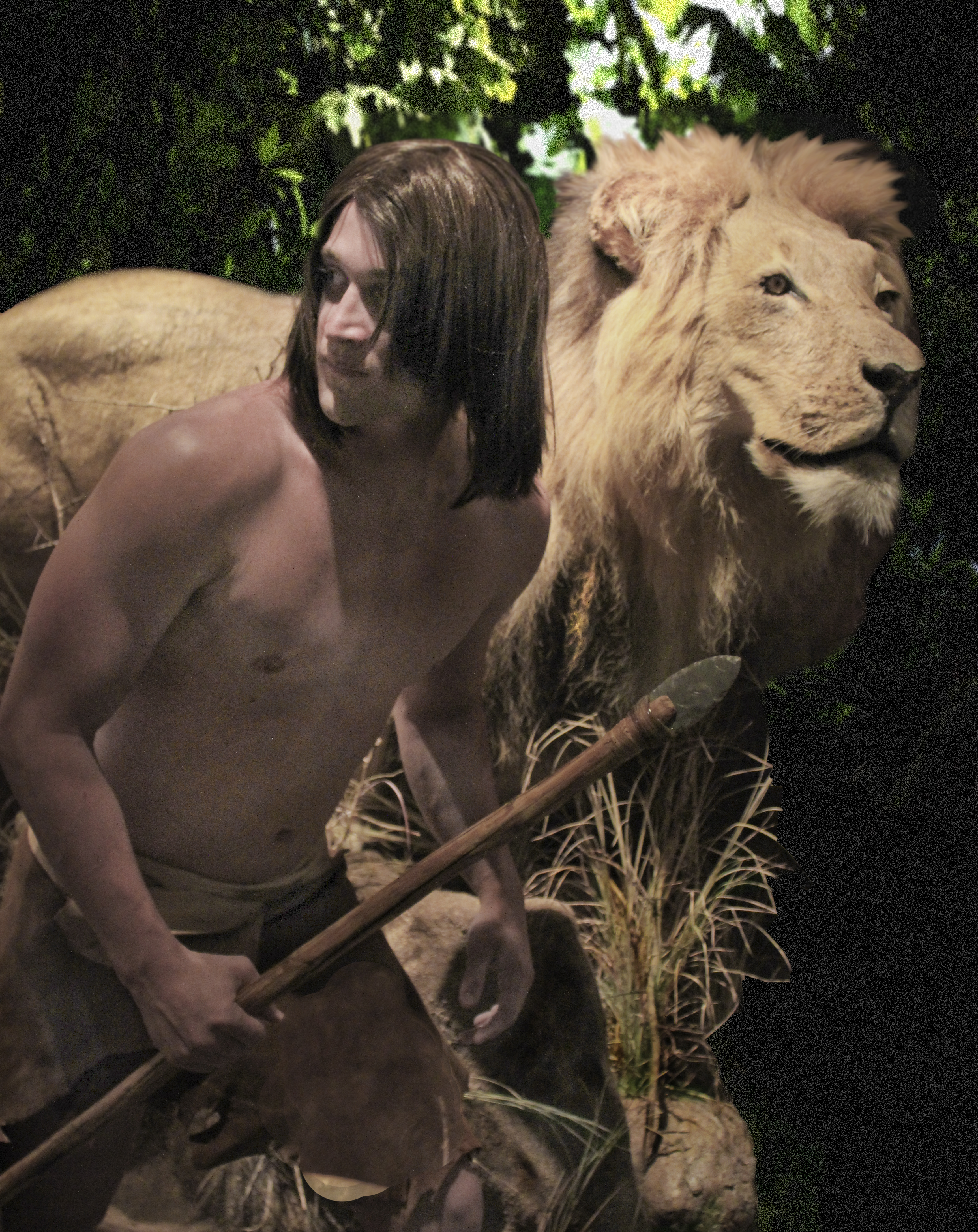 Last week, I made a trip to the Tarzan: Myth & Mystery exhibit. I was greeted at the front by an energetic, helpful young lady named Tatum. I walked my way around the exhibit taking pictures and I marveled at the stunning taxidermy animals. They look so vicious and realistic. It really made me feel like I was immersed in the Tarzan jungle setting of Africa. 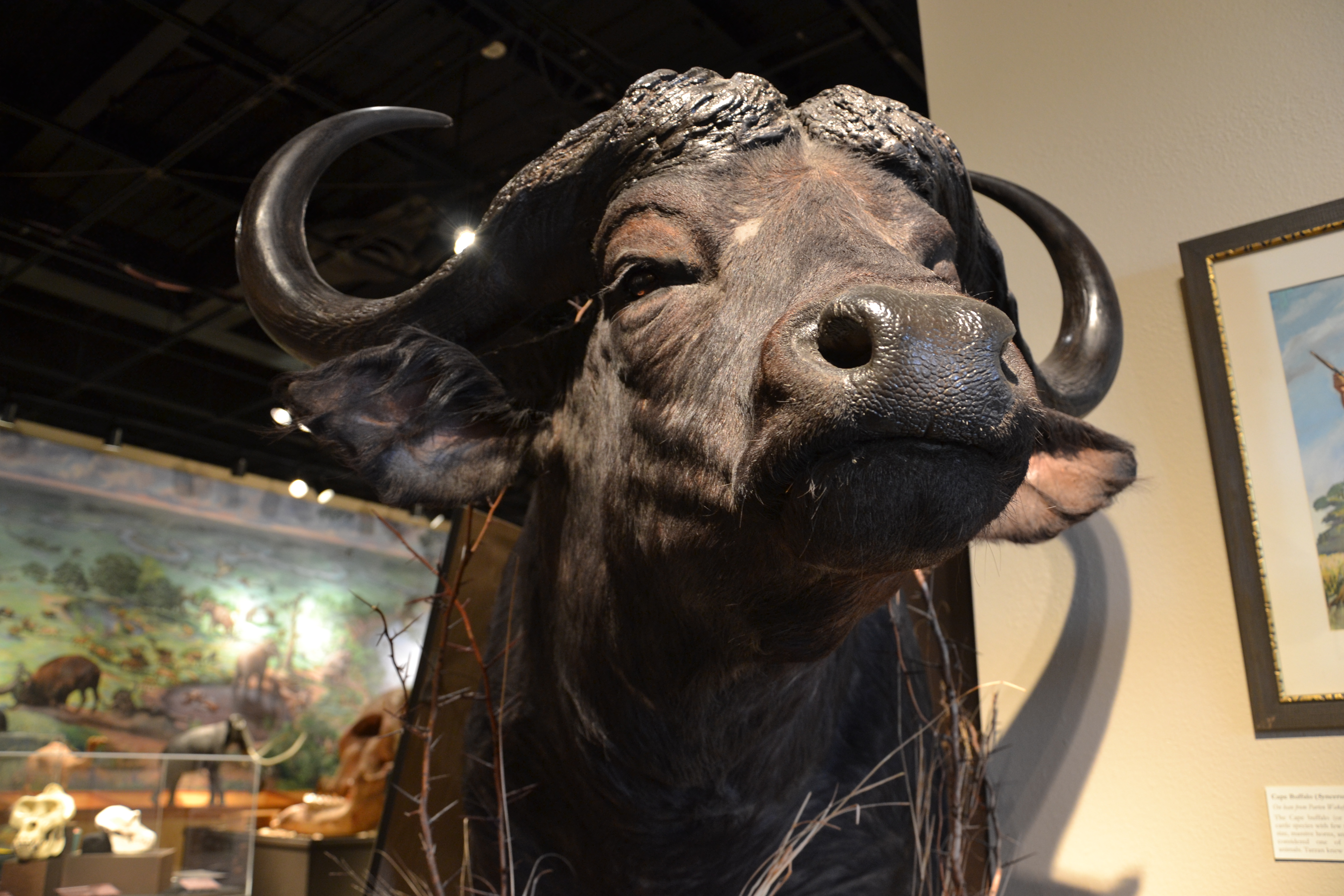 I was blown away by the attention to detail put into setting up the display cases full of one-of-a-kind memorabilia. I had no idea how popular Tarzan has been throughout the years since Edgar Rice Burroughs introduced the character in 1912. As you walk through the exhibit, you pass by a background of Tarzan that describes how the character came to life. You also learn about the life of author, Edgar Rice Burroughs, and what inspired him to create Tarzan. 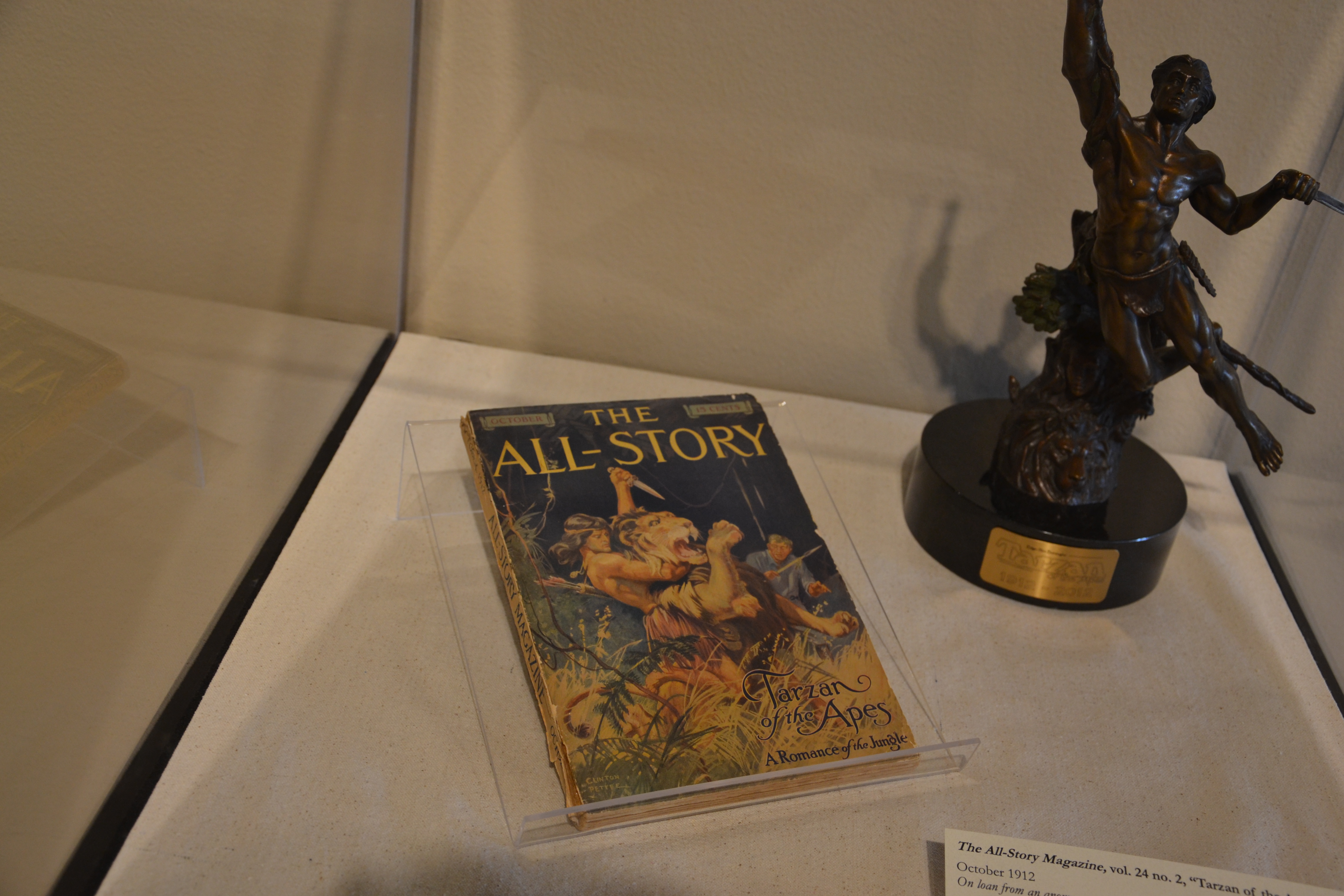 This is the publication that started it all; “Tarzan of the Apes” in The-All Story Magazine represents the first appearance of the Tarzan character in October 1912.

The Tarzan: Myth & Mystery exhibit transitions to a focus on the setting, geography, and animals represented in Tarzan literature. The exhibit includes everything you could think of relating to Tarzan, including the many actors who have portrayed Tarzan, the biggest Tarzan films, various Tarzan comic strips, books, and countless valuable pieces of memorabilia. It even touches on national controversy that arose from Tarzan in the mid 1920s. 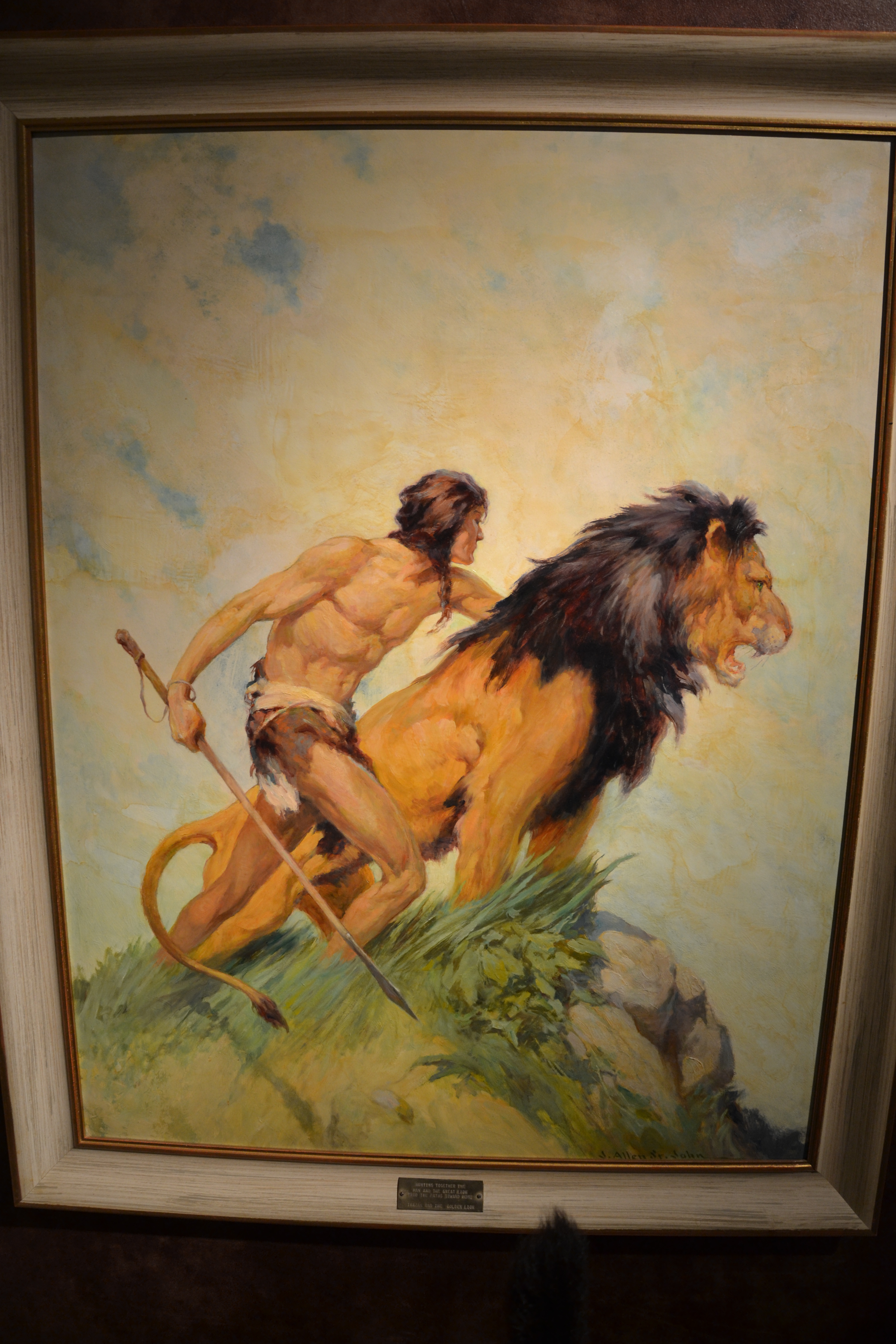 My favorite piece in the exhibit is an artwork titled “Tarzan and the Golden Lion” by J. Allen St. John. The vibrant colors and figure shading are quite impressive.

Tarzan is such a riveting story because Burroughs wrote it in rebuttal to the developing industrial age where men were moving to the major cities en masse. The original Tarzan film was one of the first six silent films to gross over one million dollars. Tarzan is the most filmed character in motion picture history, and has been featured in over fifty major motion pictures, 6 television series, two Broadway stage productions, and thousands of publications and licensed products. The timing of this exhibit is great because of the new The Legend of Tarzan movie out in theaters now. If you plan on heading to the cinema to watch the movie, be sure to stop by the Tarzan: Myth & Mystery exhibit first for an interactive experience.

The Tarzan concept has changed and varied over time, but a universal Tarzan image has lasted through generations. Everyone needs to go experience the Tarzan: Myth & Mystery exhibit because the Tarzan stories are multi-national. Tarzan has captured peoples’ imaginations worldwide. The character of Tarzan speaks to people of all ages at all times. 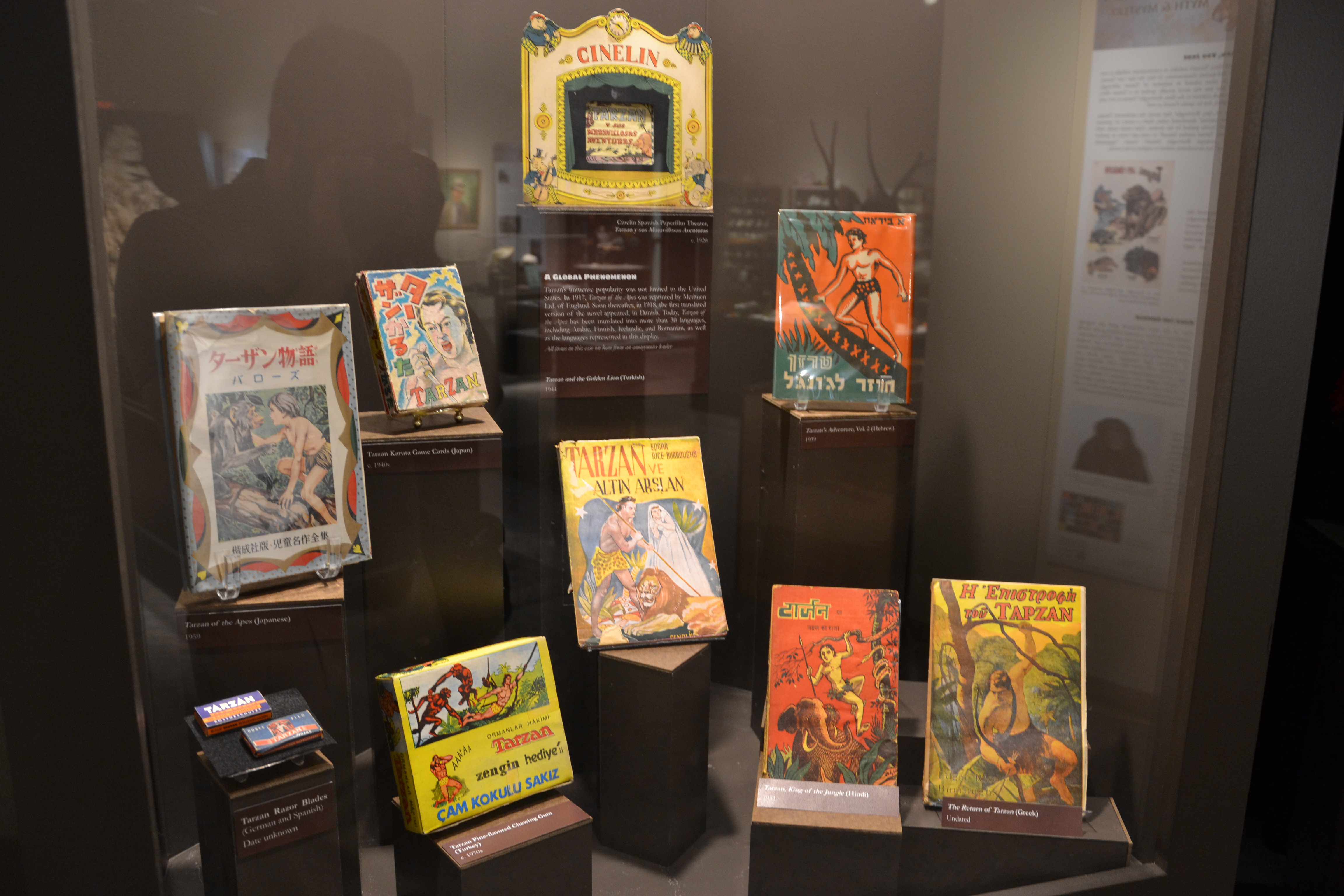 This is a display case with Tarzan novels translated into several different languages, showing how the character extends beyond the American culture.

The Tarzan: Myth & Mystery exhibit is important to me personally because Tarzan was such a huge part of my childhood. I was one of those kids who ran around the neighborhood shirtless attempting the Tarzan yell. The adventurous jungle man theme hits home with me because my father was born and raised in the jungles of Peru. He embodies the symbol of a wholesome, kind-hearted, heroic man in touch with nature, much like that of Tarzan. 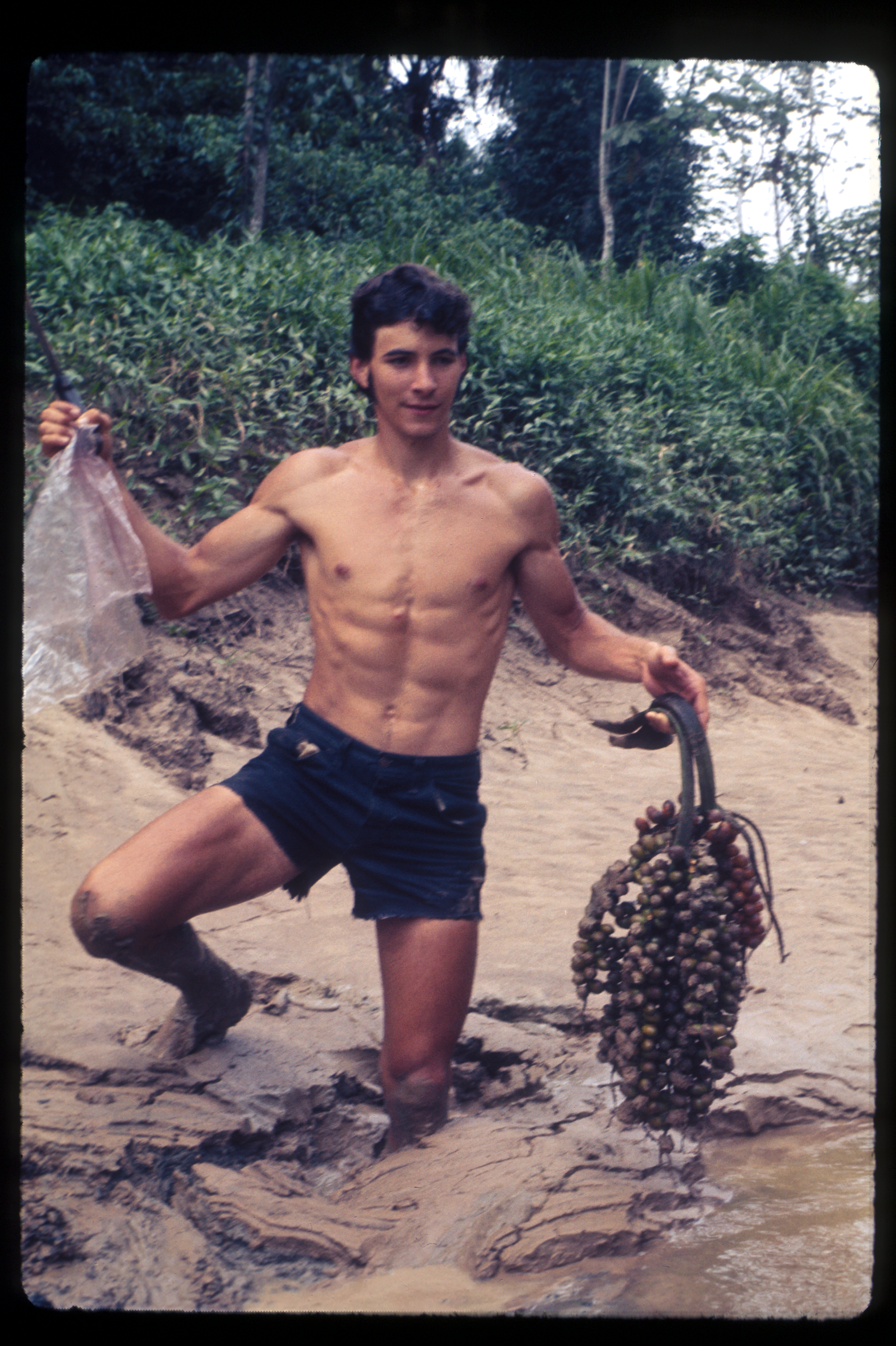 My dad was born in Yarinacocha, Peru and he grew up among the people of the Capanahua Indian tribe. This is my dad rocking jorts while hunting and gathering in the jungles of Peru.

In my time spent at the Tarzan: Myth & Mystery exhibit, I was fortunate enough to have the opportunity to talk with Dr. Deborah Cowman, Executive Director of the Brazos Valley Museum of Natural History. She was so enthusiastic and passionate about how all of the rare pieces of Tarzan memorabilia have come together to form such an unparalleled exhibit. This is the first and potentially the last time all of these unique Tarzan related pieces will be together in one place. Everyone should take a trip on down to the Tarzan: Myth and Mystery exhibit before it leaves on October 29, 2016!